Seeing bands or musicians that you have loved since forever and then getting disappointed is a pretty tricky thing. Like all new Sonic Youth solo projects - Chelsea Light Moving, Body/Head, or Lee Ranaldo's new band. It almost seems like they want to destroy their own legacy.

Anyway, I wannt to tell you about Caspar Brötzmann's latest band project Nohome. They played last Friday at Volksbühne. They formed as a improvisational trio for last year's A L'Arme Festival and played a mindblowing set. A couple of month later all three and FM Einheit (of Einstürzende Neubauten fame) recorded a live-album at Radialsystem - if you listen carefully can hear me going mental on that record. Together with drummer Michael Wertmüller and bass player Marino Piakas, Nohome is a heavy (sic!) more-Free Jazz-than-Rock (sicsic!) explosion. 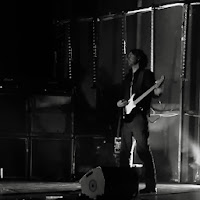 So, seeing them twice before, I was psyched when I heard they will play again. I got my ticket quickly to avoid standing on the wrong side of a sold-out show. Hmm, but when I arrived Friday evening at Rosa-Luxenburg-Platz and heard only 100 tickets were sold I was really surprised. Strange, I thought, more people are interested in this band and opening act Robert Lippok. Seems like I'm always wrong with prognoses.

Robert Lippok, who founded electronic post rock trio To Rococo Rot in the early 90s in Berlin, played a solo set as opener. His set-up with a strangely installed bass looked very promising. Bouncing beats combined with dark electronic sounds could be good, but maybe I wasn't in the right mood or it wasn't that good. Can't decide. Don't get me wrong his 45 minutes set was probably a good opener and didn't hurt at all.

But I was there because of Caspar Brötzmann. His Caspar Brötzmann Massaker was the soundtrack of my rebellious adolescence. I hadn't heard such a unique guitar sound anywhere else. I'm a fan! He plays more with feedbacks than actual chords and creates thereby a haunting, loud and confusing sound.

It seemed like FM Einheit had become a constant member of his because his massive metal springs were hanging again from the ceiling. All four musicians entered the stage and I was pretty excited. Einheit started with a drony sound and bassist Piakas joined him while the rest waited. I thought they want to build up some tension, but when Brötzmann played his first tone I was thinking HÄ!. Of course he played his typical style but it sounded wrong somehow. Fortunately, drummer Wertmüller began his double-bass attack and it was loud and in your face. After a short adaption phase, I saw Brötzmann shamble on the stage and I didn't like what I saw and heard. Uninspired improvised chords and after 20 Minutes he left the stage probably not satisfied with himself and never returned. The residual 3 tried to cope with the situation and at one point the drummer screamed behind the stage to motivate Brötzmann to come back but nothing happened. So, I payed 16€ to see a fucked up show of one of my guitar heroes.

When they left the stage the audience was kinda confused. Some clapped, some booed. Like everyone else, I was pretty disappointed and asked myself what had gone wrong. Someone told me he was way too drunk and someone else said they argued behind the stage before the show started. Anyway, it was not professional behaviour and I think I have to reconsider my fandom.

And I have to agree with a Last.fm comment at this event page: What a disaster was this concert, And what an asshole Mr. Brötzmann!
Posted by XnormanX at 09:23