My top of the year list is pretty much drawn up. But oh, shock horror, two of the concerts featured never got a review. Guess it's time to get off my lazy (busy) bum and on to it. In this case, I had sort of written the whole review in my head while at the show but then never wrote it down. A Craze classic. 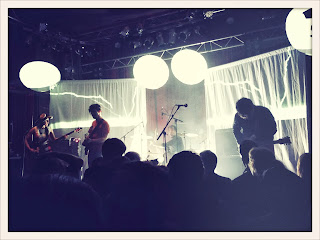 In the 1990s, most independent music bands had "a thing". It could be something subtle like putting on a fake voice (Calvin Johnson and his Dub Narcotic Sound System) or playing a saw in darkened rooms (The Black Heart Procession). Or it could be in-your-face weirdness like pretending you are agents (Frodus), insects (The Locust), or gospel preachers (The Make-Up). Man Or Astroman? managed to top everybody by saying they were from Outer Space and creating a whole story and imagery around it. At some point, they even planned to have several bands tour the planet simultaneously as Man Or Astroman?, though that never materialised as far as I am aware. Incidentally, they also had a side-project called Servotron, in which all band members dressed up as robots.

As silly, and maybe slightly outdated, the whole idea of bands assuming fake identities and making up stories seems, there is something admirable and fun about the effort that went into these assumed personas. You identified each band with a distinct image, you had expectations and live shows could exhale the atmosphere of a circus show. Luckily for 1990s independent music, being a little silly did not take away anything from good music. Really good music.

I do not tend towards nostalgia. The new excites me. The here and now, or better, the future is where I like to be. Every now and so often though, you hear a name or a song and you remember the emotions you felt when you used to hear it. Man Or Astroman? are one of those bands that do that for me. So the minute I read the show announcement by Eine Welt Aus Hack, I was on to buying my ticket. It was only afterwards that I realised that a lot of folks in my surroundings had never heard of this band before. It may be that several of my friends are younger than me. Or it may be that I was just into weirdo stuff back then. Gary and I, and our friend Steffen, got more excited as the day drew near, while everybody else was like "I need to have a listen first". Yeah, you do that. And you'll love. Don't miss!

Of course, when you get excited, the chances of disappointment mount. We were nervous. No worries captain! As soon as the stage was set up, we knew this was going to be epic. Several screens, including round satellite-looking ones, reduced the stage capacity of Lido significantly and got everybody intrigued. Once the band played their first chords, the various space-themed projections were running, the costumes were looking good, all was well. The room was dancing from chord one until the last minute. The band was missing one vital member - even this did not matter.


Contrary to what you might expect in terms of music style, Man Or Astroman? play surf rock, pure and simple like that. That they play very well and to a point where they reach a large variety of people, not just fans of the genre. Does surf rock hold up in 2013? Yes it does. Very much so. You would think this music clearly belongs in another century, wouldn't you? In my humble opinion, current music is very serious. A lot of bands and musicians have not stumbled into a music career, like indie musicians used to. They have studied it, are often trained classical musicians, want their art to be taken seriously. At the same time, there is a lot of music that sounds the same. A lot of guitar-with-electronic-elements and perhaps some classical stuff thrown in. A lot of "garage rock the way they used to make it" or all that dream pop. I love bands of all of these directions, I do and I feel we are lucky to have such talent around these days. Every now and so often though, you just want plain old fun. You want a jig and a smile and to lose yourself in the moment.

As far as that goes, Man Or Astroman?, as much as Rocket From The Crypt did in April this year, will come at you as a blast from the past, as a fun-filled rocket. For that, I am grateful. And for this very fun evening that will not be forgotten for some time.
Posted by chantal* at 08:49