At the end of November there was a chance to check out a small showcase of bands hailing from the land of maple syrup and moose (all of the bands being based or having some connection to Montreal, to be precise), presented by Shameless/Limitless. 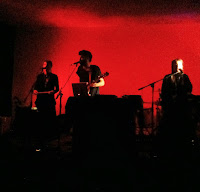 Doom Squad were first on the line-up. This band formed by three siblings proved that witch house did not end with Salem's last release and might still serve as an aesthetic foothold for those whose interests lay in the occult as well as electronic music. Compared to the crowd of copycats that emerged from this micro-genre, these guys seem to stand out. Instead of looking jaded or too-cool-for-this on stage, they genuinely seemed to be having fun right then and there, engaging in some kind of a personal ritual. The girls were dressed up in long, black dresses, yet somehow they looked more cute than goth, doing synchronised dances when they weren't busy playing different kinds of electronic and accoustic instruments. The parts most to my taste where when the guy got to sing and make sounds with his guitar, it added some reverb-y, post-punk feel to the tribal repetetiveness. 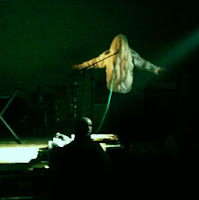 Next, there was Secret Secret Girl, which turned out to be two guys, both in disguise. One masked individual was operating the electronics while the frontman singed his heart out from behind a piece of cloth which covered his face. Motioning on stage like a true diva, he incited some dancing and a lot of curiosity in the audience. 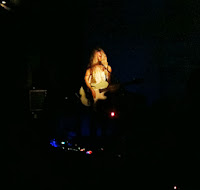 Just as the venue got a bit more crowded, No Joy started their set with a blast, creating a wall of sound like proper shoegazers should. It was super-loud and noisy which always creates a challenge for the PA, but it didn't sound painful, so I can't complain. If you had a chance to see My Bloody Valentine this summer, you know how vocals purposefully melt into the background and sometimes become even barely hearable when this type of music is performed live. Here, they became even more of a ghostly presence than on the records, harmonizing somewhere in the effects and feedback-heavy complexity of the work done by the guitars. Along with the punk-y sounding rhythm section, the whole band managed to create a coherent, organic whole from the set which incorporated different songs from its timeline. They rocked quite hard and it was fun to see those 2 girls being pros at what they do.