This was a bit crazy, I just found out a day before that Beak> were playing at Berghain Kantine and I was pretty excited about it. I totally love their first record so I was even more excited to learn that they were going to present their newest record that night.

We had a nice bike ride to Berghain and we were pretty early, so we grabbed something to drink and spent some time outside. Anika (read our review from her last Berlin show here) was DJing before and after the concert but I wasn't really in the mood of staying in a dark and hot room any longer than I'd have to. So we just went inside shortly before Beak> started to play.

It was my first time at Berghain Kantine and I have to say I've seen worse venues. I liked the low stage. There's nothing fancy about it but it's also not uncomfortable in any way. It probably doesn't really live up to people's expectations when you try to link it to Berghain itself, but for smaller concerts it's actually a pretty neat location. The entry price of 15€ for just one band (plus Djing, but yeah...) wasn't that cheap but since I really wanted to see the band I didn't care too much. 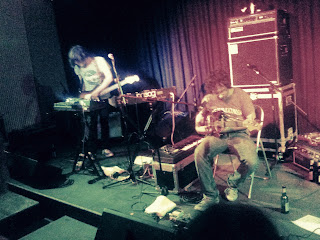 Beak> began to play pretty early and after about one or two songs they got me. They're a three-piece featuring Geoff Barrow from Portishead on drums and they play a kind of experimental minimalistic, but at the same time "groovy" (that sounds considerably worse than I mean it), music based on clear dry bass lines and fairly straight drumming. Add some synths and sometimes guitar to that and from time to time some distant reverbed vocals and you're sort of there. Their first record was very dub oriented and I'm totally into their kind of dark and noisy take on dubby music.

They played many songs from the new record and these were obviously less dub influenced but sounded a bit more like Krautrock, which wasn't a bad thing at all. The new songs still have that minimalistic and groovy feeling and they worked pretty well, not only for me but apparently also for the rest of the audience. Everybody was enjoying themselves, even when Berghain Kantine got hot and hotter. Towards the end of the concert I could feel sweaty drops dripping down my back and legs and I craved some fresh air but at the same time didn't want to leave the room because of the great concert I was just witnessing. The band was obviously in a good mood and they joked around which was a nice contrast to the often rather dark songs.

At the end they played two of my favorite songs from the first record and then left the stage without an encore. I was entirely content and happy that I had decided to go there. The new record is totally amazing, an immediate candidate for my records of the year list. Seriously, listen to this, it's really awesome. Check out their bandcamp page where you can listen to the whole album before buying it on vinyl. I hope they'll come back sometime soon!