Oh man, I'm lagging behind. Psychic Ills' Berlin show is already more than a week ago. It seems like the upcoming summer gets us away from our computers. And it all started when Psychic Ills played at Bassy, I remember that because I was just wearing a shirt this Tuesday night on my bike and screaming at too many drunken tourist standing on the bicyle lane. Berlin summer, everyone loves you.

When I first read Brooklyn's Psychic Ills are playing a Europe tour I was really pleased because their 2011 record Hazed Dream on Sacred Bones Records was one of my favorites this year. A super cool blend of psychedelic-, kraut- and spacerock not unlikely labelmates Moon Duo. Very laid back, infectious and poppy at once. I played it over and over.

I can't really remember when I was the last time at Bassy's Cowboy Club. It must be years ago. To be honest I do not fancy that part of Prenzlauer Berg anymore. It's only a couple of steps away from where I grew up, but nothing there reminds me of my childhood. Anyway, shortly after my arrival, opening act Delta Love entered the stage. Seems like they are becoming everyone's support. Like some weeks ago The Men's at Festsaal Kreuzberg. Delta Love is a duo and plays a lo-fi combination of garage and blues. From the beginning on they had a lot of sound problems and were really annoyed. And at one point I was more distracted by this gorgeous Robert Redford movie poster opposite the stage. Sorry. 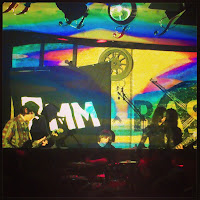 In the meantime the Bassy filled up and when Psychic Ills started the club was packed. Hot and no air to breathe. Maybe they set this appart, because it worked just fine with the colorful light show. With the first guitar tone everyone moved slowly and it felt like a wave. In some way very hypnotic. Originally as a trio they invited two extra musicians on tour to fill up the sound. So with 2 guitars, a organ, a bass and drums they mostly played songs of their new record One Track Mind. For me, trademark of Psychic Hills' sound is always this reverb soaked solo guitar and kinda bored vocals and we got a lot of this. From time to time they stretched their songs to one big and massive lava stream. Groovy (!) and electrifying.

Over an hour and an encore later the band and the audience seemed very happy. And I was urging for air to find this side of Schönhauser Allee way too crowded, but this time I wasn't mad. We shared a super nice show together and that binds.
Posted by XnormanX at 23:48