Unfortunately I arrived a bit late to this show, so I can't really say anything about Sand Circles, as I just catched a glimpse of his performance. Pretty quickly after that, Miles was up to play. A single guy playing music that drifted between ambient drone parts and danceable but still dark beat oriented electronic music. I really liked the more noisy parts of his set and although his music is not something I would usually listen to, he managed to keep everything interesting enough for me to stick around. 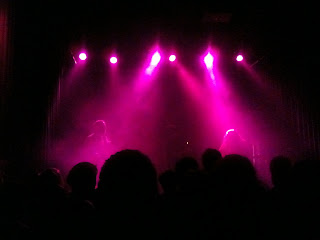 When Wolf Eyes finally started to play, Festsaal Kreuzberg filled up to a decent amount of people, although it seemed far from being sold out. So much the better, it was easy for me to get a comfortable place with a good view.


Wolf Eyes played as a trio with processed vocals, guitar and several other instruments, that besides of a clarinet and some other wind instrument I could only suspect to be some sort of crazy synthesizers. Their set-up was rather minimalistic but I was instantly impressed by how dense their sound and music was. Mostly driven by only the hint of a bass drum beat, they played a very dark and almost doomy noise set that reminded me more of an odd mixture of bands like Excepter and Sunn O))), than of the harsh noise of many older Wolf Eyes records. The nasty vocals did their part to create a dismal atmosphere of industrial and heavy sounds. While Miles played a continuous set, Wolf Eyes played seperate songs and although I expected this to be much more unaccessible and crazy, I had the feeling that they stuck to certain fix song structures. Nonetheless their show was very consistent and intense, I was really amazed at how deep their minimalistic set up sounded. I had not expected something this ambient and -let's call it- creepy, but I have absolutely nothing to complain about as this turned out great nonetheless.
Posted by J. at 11:24