Ah, it's always good to explore new parts of Berlin's culture. Well, Neukölln isn't really unknown territory, but have you ever heard of the small basement place called Boom!? I hadn't, so I was pretty curious when someone gave me the flyer to Nicoffeine's show on Saturday there.

Nicoffeine is part of this late 90s till now West German noiserock scene around the (maybe) well-known label BluNoise and their mastermind Guido Lucas, who played in and recorded thousand of bands. To be honest, I only discovered Nicoffeine last year when they released their 4th album Lighthealer Stalking Flashplayer and I had missed them everytime they played in Berlin since. Argh! 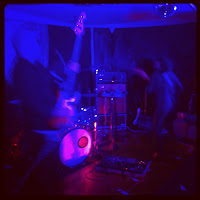 So, I found myself in rural Neukölln in a fuzzy cliché party basement sitting on a comfy couch and missing out the opening act Grow Grow. The few things I remember were a powerfull bass sound and an overacting singer/guitar player. Nevermind.

Only a few people stayed when Nicoffeine started their set and it was loud. Screaming loud right from the beginning. A guitar, a bass and a drumset played by old dudes and I loved it instantly from the the first tune. Described as blend of noise, drone, no wave, sludge, psychedelia and avantgarde, they crossed every border. Their performance I reminded me strongly of Japanese act Les Rallizes Dénudés, with the feedback giving guitar, the pumping bass, and the jazzy drums.

After finishing their set, we took our bikes home happy and with ringing ears and discussed the importance of Musikhaus Bading and the political issues of Futurism. The whole night was the best possible way of spending a Saturday night.
Posted by XnormanX at 15:12