Although I've already seen Woods a couple of times over the last years, their live shows were never the same. And despite the fact that I expected something slightly different from this evening, this was still a good show. 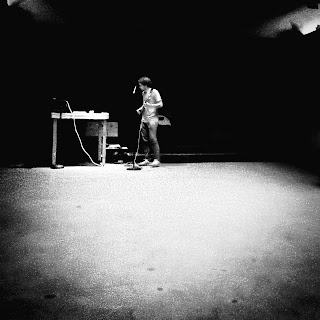 During the last few months, Emperor X played in Berlin quite a lot but I've never actually seen him live. This was about to change, as he supported Woods at Berghain Kantine this night. I listened to a couple of his songs online before and I was expecting something very experimental and weird. What he actually played differed quite drastically from that. He played relatively straight forward indie singer songwriter folk music, mostly reminding me of bands like Polite Sleeper. Equipped with not much more than a guitar and a microphone that effect processed his vocals, he presented a rather extrovert performance, wandering around and away from the microphone, changing between very loud and more quiet parts of singing and playing and involving the audience in what he was doing. He combined lo-fi music with witty and often funny lyrics. All in all I think this just wasn't really my cup of tea musically although it also wasn't bad at all... 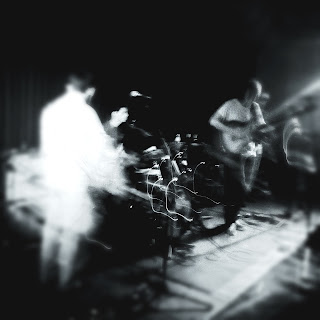 As I said, I saw Woods more than once (see my latest review from 2011 here) and I love many (meaning: most of) of their records. Actually, the fact that I found Bend Beyond, their latest album so great eventually convinced me to go see them again. They changed their line-up and instrumentation a couple of times during their band history, this time they played in full rock band outfit with electric guitar, electric 12-string guitar, bass and drums. Seeing no acoustic guitar was a first surprise for me (although the newest record also doesn't sound very acoustic guitar based), and when they started to play they sounded very heavy and full - something I also had not expected. I always loved Woods for combining a lo-fi attitude and sound with a quirky and weird way of expressing themselves. They always managed to break with certain rock-stereotypes without declining them completely and although their influences - sound wise ranging from the Beatles over Neil Young and Pink Floyd to more contemporary punk or rock acts - were never really hidden, they still always sounded like Woods.
What happened this night was something like a shift from the weird lo-fi folk they used to play (and that I also kind of wanted to hear/see) to a significantly heavier sound, loaded with psychedelic-rock influences and endless guitar-solo and noise passages. They played their songs almost twice as fast than on their records and they seemed a bit reserved and distant. Maybe that was due to the fact that this was their first show of the current tour and they still had some equipment trouble, but I don't know...


Still this was not a bad show in any way. Like I said, I may have expected something different but that doesn't change the fact that they still sounded like Woods and that they also still included all those things I like about them. After having played mostly newer songs throughout their set, they returned for a single encore and played Rain On, one of my personal favorites and it was great to hear yet another version of that song live.