The performing of classic albums by artists has become such a commonplace occurrence that its almost expected, if not demanded of an artist. But tonight’s Melvins show is low on nostalgia, and free of the artistic and commercial cynicism with which some bands approach their old records. A show like this can never be nostalgia free – everyone is transported back to their first encounter with an album, who they were, where they were, and what a record means to them. But throughout their 30 years of existence, the Melvins have consistently refined their sound, and their approach to playing tonight’s pair of fan favourites, Bullhead and Stoner Witch, is to reinterpret much of that material, rather than purely recreating the recordings, meaning these twenty year old songs sound modern and contemporary, placing the band light years ahead in complexity and creativity of their peers, both old and new. 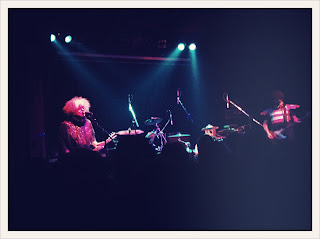 Bullhead, bizarrely, was one of the first compact discs that I ever bought in 1991, and whilst that format inevitably lacked the deep tones of the vinyl edition, the clarity and space in their music opened up then for the first time.

They rattle through an exhilarating version of Its Shoved and a superbly twisted Zodiac that sees the band build layers of voices and drums, the addition of a second drummer in their current incarnation bringing much of the new energy to these old songs. The dark, heavy drone of Boris, with its unexpected, quieter but more menacing reprise, reveals how skilled they are at building atmosphere and tension, taking the audience by surprise as they end the first set.

After taking a break, the second half of the show displays more of their sense of control, and their lack of fear of those quiet moments that counter balance the moments of aural rage. They begin with Lividity, the closing track on Stoner Witch, which starts with just the constant tap of a cymbal and a slow but melodic bassline that builds in its intensity. After a few ironic shouts from the crowd, the audience falls in with the mood of the song and stays silent, rocking back and forth and Buzzo’s repeated wail of vengeance, “how does it feeeeel, redneck?”, echoes back at us in a great piece of sound design.

The faster, heavier songs like Queen, the ones that get their audience jumping around, actually tend to be shorter slabs of metal than you remember. The Melvins have always used their riffs economically but for maximum effect. Their songs aren’t improvised, extended jams - each song takes a turn when you don’t expect it, they come to a sudden halt with a juddering drum beat and then they often change tempo altogether. There can be seconds of silence and an increase in tension before release or even just dissipation.

Tonight, The Melvins turned around the familiarity that comes through playing well known material by injecting a jolt of adrenaline into these songs. Festsaal was a furnace of heat at smoke tonight, but ultimately, music this dark is life affirming (as highlighted by the band's own humour in-between songs), and its effect stays with you days later.
Posted by garyw at 20:01