Although I'm still not the biggest fan of their newest record, I have to say Liars did impress me yesterday.

I have already seen Liars live three times and have mostly very positive memories of said shows. Even though my favorite show still remains the one in 2004 when they had just released their second record (and possibly my personal favorite of them)  They Were Wrong, So We Drowned and completely blew me away, the two other shows in between then and now (one at Festsaal Kreuzberg some years ago and the one at Volksbühne, together with Health) still were at least pretty good. In the end Liars also seem to be one of our blog favorites (see our last review here), so I knew this couldn't possibly go completely wrong. 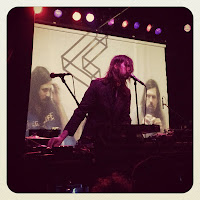 Now touring with a recently released new record, it was very likely that they would also want to play these new songs live. As I said I'm still not that fond of WIXIW but I also don't really dislike it. It's a mostly electro dominated record and the thing I really appreciate about it is that Liars do on it what they do best: mess with people's expectations. They have managed to release six records altogether and every single one of them sounds somewhat different than the others. This way they have made many stylistic transitions from something like dancey post punk to experimental and noisy avant garde music, threw in an almost "rocky" record and released another one that was mainly based on drums as the central concept. And I liked every single one of them.


Now they moved forward again, progressing from the sound they have played before. They have changed instrumentation and also their way of writing songs. You can read a great interview on Berlin Beat about this here, where they describe pretty up front what makes WIXIW different from their previous records from their point of view. And I think it's great that they did not stick to their sound(s) but tried to find new ways of writing and new approaches to dealing with sounds and styles. 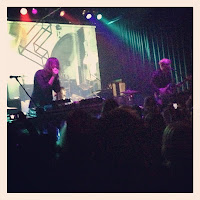 So, Liars came on stage wearing nice suits and surrounded by a decent amount of equipment and started to play. They began their set with a few new songs in a row and somehow sounded "very Berlin" with pretty straight forward dancy electro music. I'm not that keen on this stylistically, so I started to worry if I'd like the rest of the set. Luckily my worries quickly became redundant, because again, they did the Liars thing of breaking down expectations and moments that last too long. They threw in some older songs that were significantly more experimental and at the same time significantly less catchy. They somehow reminded me of a "modern" or rather contemporary version of This Heat, mixed with some electronic sounds and the edgieness of various No Wave bands. I really enjoyed the versatility of their show and it was pretty interesting to see and hear the sound boundaries of the individual records melt together into a consistent set of songs. They left the stage after the last song but came back to play another two songs. When they finished with Broken Witch, the first and one of my favorite tracks from their second record, I was totally in awe and happy having seen them live again. I'm curious what they'll be up to next.
Posted by J. at 19:49