A little while ago, the lovely ladies at Julie Tippex asked me to contribute to their fanzine, which was going to be all about dancing. I was asked to list and write about bands, which are good at dancing and do individual dance routines. Unfortunately, I didn't have the time to write my piece and frankly, I didn't feel inspired at the time.
Then, I went to see Architecture In Helsinki  and I hadn't seen such great dancing in a while, and suddenly it was all very clear to me. Sorry ladies, a little late, but my top dancing bands are:
1) Architecture In Helsinki
2) CSS
3) Le Tigre
4) PTTRNS 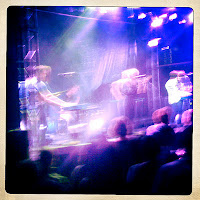 This band is really amazing at stage performing. Each of the six members dances indivually but also together, jumping around, interacting with their audience. It's so much fun to watch. I bet they all practise their amazing dance moves in front of a mirror. And the predominantly young audience? Goes insane! I haven't heard that much screaming since going to see New Kids On The Block in 1990. And the entire (!) room was dancing, except for one guy standing still in the middle. He must have had some willpower! That was really something. 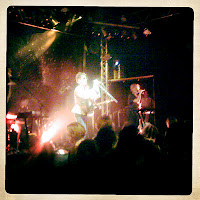 Musically, AIH are very late 80s alternative quirky pop, somewhere between B52s and Squeeze, but with a dance beat. Featuring three keyboards, two guitars, a bass and a drum set, the sound is varied but somehow also always similar, that dancy pop with an edge. I absolutely love some of their songs but overall, it's maybe just that little too dancy poppy for me. But you know, it works. It's a concept well thought out and fun. And you can tell that the band enjoys playing their songs, smiling all the way, and improvising if something doesn't go to plan (yes, that included a sung guitar solo!).

For an indie band AIH are remarkably professional - they know their crowd and they know how to please it. The show ended with a well anticipated rendition of one of the greatest songs ever, Heart It Races, as the final encore.

I've had an ohrwurm of Contact High ever since the gig and, entirely unrelated it seems, the concert somehow made me want to see this afterwards: Beetlejuice Banana Boat scene