I almost missed this one and only found out that Greg MacPherson was playing at Roter Salon in the Volksbühne, because friends of mine asked if they could visit me on an extended weekend to see the show on Monday. I saw Greg before several (four, to be exact) years ago and I like a good deal of his records, so I went with them and didn't regret it. 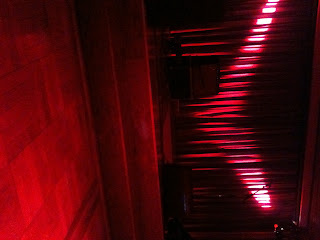 We were quite early as I thought Volksbühne is more strict with their schedule. So we hung out in front of the building a bit and waited until the entry was open. Surprisingly there was nearly no one else attending, so everyone of the only about ten (!) people who came could get a nice comfy armchair directly in front of the stage. Roter Salon really lives up to its name with red curtains, red chairs and red light and I have never came so close to a real life Twin Peaks experience than in this room. The only things missing were the backwards dancing person of short stature and the Twin Peaks music...

There was no support act, so it was just Greg MacPherson with a microphone, guitar and amplifier. But this gig wasn't just reduced to the essentials, it was also very intense and good. Greg enjoyed the intimate atmosphere and chatted with the audience, from which he funnily knew most of the people. He filled several song requests and told some background stories behind the songs which was quite nice. 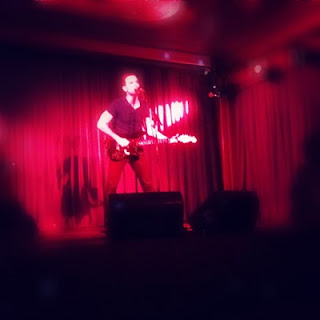 All in all this was a pleasantly relaxed concert. I heard all the songs I hoped to hear and had a good time so I didn't mind paying a relatively high entry price of 10€ for just one solo act. But despite Roter Salon being a seriously beautiful venue, I somehow wish he had played somewhere else. This didn't seem to be the right surrounding and I think in another venue there would have been a lot more people attending. I also think Roter Salon/Volksbühne isn't particularly great in promoting small concerts like this... As I said, if it wasn't by chance I would have certainly missed this. Hopefully next time he plays under better circumstances.