J. spotted this one way before anyone and we were quick to respond. And so it happened that I was standing on Köpenicker Str. in the early hours of the evening, waiting to be let into Tresor. Einstürzende Neubauten, Wire, and the Caspar Brötzmann Massaker were going to play a free gig for the benefit of a TV recording.

The management of this part of the evening was atrocious. A large crowd of people had assembled on the pavement and only a few people at a time were let through the gates. This meant that a lot of pushing ensued and for a moment I felt like giving up and abandoning the concert as my evening entertainment. But it was too late. There was no getting back, with the crowd pushing from behind. By the time I was finally through the gate, having nearly been trampled, and my name had been checked off a list, I wasn't in the mood for a show.

But my mind changed quickly. The building with its bare industrial feel is quite magical. I'm not much of a techno club goer, you may have guessed by now, so I didn't know Tresor and its interior. Very nice indeed. We grabbed a drink and tried to position ourselves well in the gig area. Now this was an unusual set up: three stages facing each other in a triangle and the audience in the middle. For the purpose of filming, a camera was zooming back and forth above our heads, held by metal rods. We were told by an instructor that it had never dropped and wouldn't do so this evening either. Good to know.

The format was as follows: each band was to play two short sets (about 2-3 songs each), with some short interviews with the groups inbetween. The presenter was unexpectedly Silke Super, of MotorFM fame. I guess she must have left the station when they changed to FluxFM. 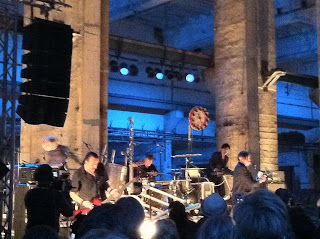 Einstürzende Neubauten started. A word of caution: I am by no means a fan. I recognise the contribution Einstürzende Neubauten have made to music and I appreciate their aim to combine art, poetry and music. But I find their records pretty much unlistenable. And I know what I'm talking about; I used to live with someone who had an EN tattoo. No kidding.
But I was sufficiently impressed this night. Blixa Bargeld looked old but still sang beautifully and overall, the group performed as if the 80s had never ended. Their self-made industrial instruments were amazing to watch and perfectly placed in the factory setting that we were in. And I guess they must have played their most digestible songs, because I enjoyed the music too, to my own surprise.

The interview Silke Super was attempting with Blixa Bargeld didn't go so well. In fact, Mr Bargeld was unnecessarily rude to the poor woman, who was just trying to do her job. I know it's his image but this was over the top and no fun to watch. I was glad when more music followed.

The next group, Caspar Brötzmann Massaker, seemed to have brought along some die-hard fans who were rocking out hard, but couldn't convince me. It was like combining hippie guitar solo stuff with industrial music. Sounds great? Well, it wasn't for me. But it could be good in the right setting for the right people. Presumably, it is. 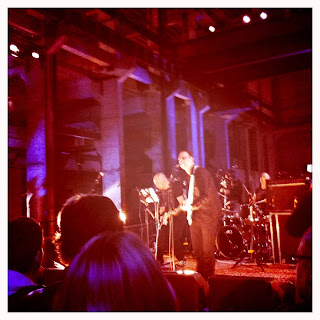 We made sure to position ourselves appropriately for Wire. At least for me, this was the highlight of the evening. I had missed them at Berlin Festival (and now I wish I hadn't) and I was going to make the most out of this one. And what can I say? They were really good. I'm assuming that you are either familiar with Wire or are going to research this right now. It's basic music lover's knowledge. But basically, Wire have set the precedence for so many bands that would follow after them. And I felt that they really lived up to that without being pretentious. I was ever so impressed by how good they were and how well they'd aged. A great performance.

To end the event, all three bands played a song together, originally by Einstürzende Neubauten. By that point, the format of the program really reminded me of Later with Jools Holland, a British live music TV show that I can recommend to any music fan. And fair enough, why should Germany not have its own Later with...

We were told that the program is going to be on TV (ZDFNeo) in early December. So watch out for that if you want to see it all for yourself.