Two Woodsist bands in one week and the Sunburned Hand of the Man concert coming up on Monday, it seems to be weird folk spring! 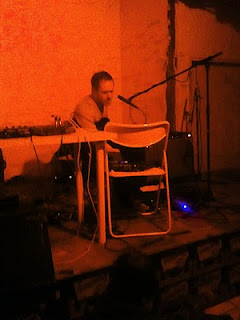 I've never heard anything from Ignatz before he opened for Ducktails tonight. But despite his obvious nervousness he did good. Ignatz played twangy echoed guitar over looped noises and guitar parts. He had a quite interesting approach to the usual singer-songwriter music, using very lo-fi vocals and guitar melodies which reminded me of very early traditional blues/folk/country tunes, think maybe of Lead Belly and comparable delta blues stuff.


Unfortunately most of the people who watched Ignatz while sitting on the floor in front of the stage didn't leave their places afterwards and kept on sitting there, when Ducktails, also just one guy with guitar, pedals and stuff, started to play. Maybe they expected something different, but Ducktails 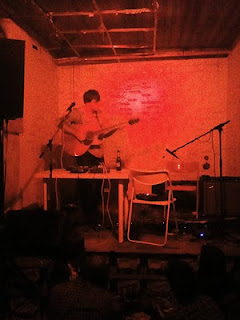 played a crazy mixture of often dancy, sometimes almost Hip-Hop style, beats over lo-fi folky guitar, vocals and loops. I really liked what he did, but except a handful of people, no one seemed to be willing to dance (or at least to move any of their body parts for more than clapping after the songs, drinking and smoking). Half of the room in front of the stage was filled with people just sitting and staring, so hats off to the seriously lamest audience ever. Nonetheless Ducktails tried hard and did as best as he could under these circumstances...
Posted by J. at 00:30