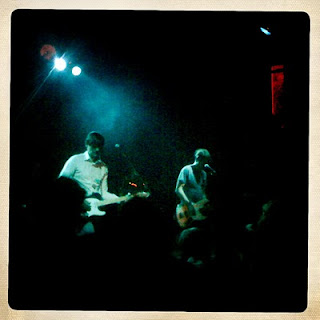 Because I lived abroad for over eight years I have missed out on a certain German music scene, with acts primarily singing in German. Last night I was invited to watch Anajo (on Tapete Records) at Festsaal Kreuzberg. I was a big fan of Hamburger Schule back in the 90s (Blumfeld, Die Sterne, Tocotronic) and intrigued what this threepiece from Augsburg would sound like, what German music sounds like.


Anajo play pop music in the sense of the term. It's rocking melodic music that appeals to a large amount of people, -> popular, and is very inoffensive. The lyrics are clever and easy to sing along to and this is exactly what the crowd does. Every song, regardless whether it's from the new or an old album, is known by heart to two-thirds of the audience.
With a very solid drummer and an extra tour member playing keys and melodica, the band still comes across more like a two man show. Guitarist/singer/song writer Olli is obviously the head of the trio but live, he is almost like a comedic double act with bass player Michi. Nevermind the Bavarian accent - people are intently following every word of these two.
Anajo performed for over 1,5 hours but time passed quickly. The songs are rather short and never reach the four minute mark, and thus, the concert was varied and entertaining. 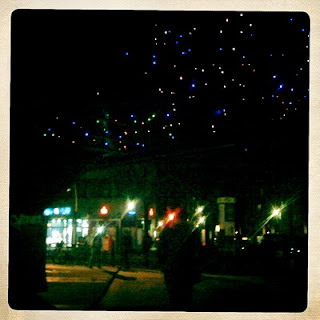 Of course, Anajo are not to my taste generally speaking, but taking that into account, the concert was enjoyable and the evening a pleasant success. The main impression I am taking away from this concert is not so much in regard to what was happening onstage but rather the dancing off stage. Anajo have a very diverse, but distinctly hipster-free, following that seems to regard the band as their absolute heroes. Fandom as I haven't witnessed it in a while: dancing, singing along, half an hour queueing at the merch table. Wow! It was absolute fun to watch this audience. Then again, I like hipsters, too. I just like people watching per se. 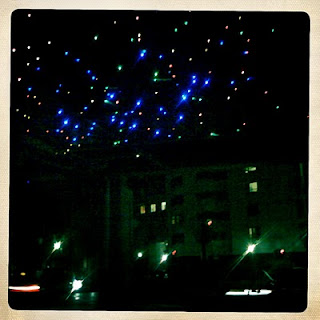 Outside Festsaal Kreuzberg, underneath the U-Bahn tracks, someone has fitted a light installation, turning Kottbusser Tor into a sparkling wonderworld. This has been my favourite moment this week, standing under the sparkling tracks, so I'm sharing a couple of pictures of this with you. You may want to consider experiencing this for yourself.


Finally, here is the video to the current Anajo single, featuring a friend of mine and giving you a nice impression of the group's work.
Posted by chantal* at 11:52