Last Monday all of those indie-rockers out there could satisfy their late night lo-fi cravings at Privatclub. 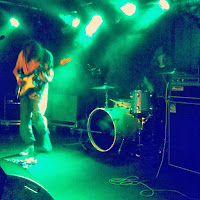 For starters, we got Jackson Scott. With influences ranging from Syd Barrett's psychedelic endeavours to early Weezer's alt-rock, this quirky kid manages to create a sound that is truly his own. And when it comes to the stage presence, he's a natural too. He engaged with the audience after almost every song with funny, personal comments. All in all, it felt as though the audience were just some of his friends he invited over for a gig in his living room to check out some new songs that he had written. He even didn't have a problem with leaving the stage for a second during one of the songs (a cover of "Interstellar Overdrive" by Pink Floyd) to go to the bathroom and take a quick pee. So effortless!

The eerie moments and the voice pitch-shifting which are present on the record got somehow lost in the fuzz of the live performance, but maybe it was for the best, as I think that it is much more interesting for the live performance to be its own entity along with its own energy rather than a faithful rendition of the recorded stuff. Here, the bass player and the drummer were crucial in achieving a grunge-y vibe, mixed up with some shoegazy undertones and even a pinch of krautrock.

I'm really looking forward to see what this young fellow and his bandmates are gonna come up with next. 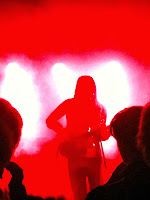 The main course of the evening was served by Jacuzzi Boys. You can read a review of their previous gig in Berlin here.

Whatever you might have expected from this garage-rocking trio, you got it. The club wasn't full, which in this case might be seen as an advantage - there was so much more space to get your groove on and dance like nobody's watching. The sped-up versions of their bittersweet anthems about having crushes under Floridian sun were impossible to resist, people were dancing and singing along. They played a lot of the songs from their new record too, which sounded much more raw live.

If only every Monday evening could look like this. Fresh, energizing, a perfect way to prolong the weekend or pump yourself up for the upcoming week.