Beak> paid Berlin a second visit for the year and after I was so intrigued by their show in July at Berghain's Kantine (read the review here) and also by their newest record, I did not want to miss this chance to see them live again.

This time they played at Bi Nuu, a venue I somehow knew but had not visited yet since it got renamed from Kato. I think they now form some sort of partnership with nearby Lido but I don't really know more about that. I only had very vague memories of the place, since my last Kato visit was a Weakerthans show in 2006. Also I did not remember the venue to be that big and also not that, let's call it "professionally" looking. In a way it has a pretty unpersonal touch but I guess if you run a concert venue for a living you have to make compromises. For a venue of that size I have to say I've seen worse and I didn't feel totally uncomfortable. Although the entry price of 17€ also wasn't exactly on the cheap side. 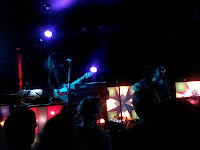 Without former Bi Nuu experience I had no idea of when their shows start, so when I arrived somewhen between 9.30pm and 10pm I had completely missed the support band. Good to know for possible future visits. At least I didn't have to wait long, as Beak> were already on stage and more or less ready to start playing. The room was pretty full and at first I was stuck at the back and it took me some while to elbow my way through this huge mass of people not willing to either let me through nor do anything besides standing, staring and/or loudly talking to each other. I somehow managed to come closer to the stage and at least I felt a bit less annoyed there and was able to enjoy the show.

For the first few songs the sound was way too quiet, but it got significantly better after a while, when several people in the audience complained about it inbetween songs. And by then Beak> sounded very, very good, I've got to say. Probably even a bit better than at their last Berlin show. They had some nice psychedelic artsy visuals on big screens all over the stage but, other than that, it was the same basic set up as before. Again, they seemed very unpretentious and likeable. 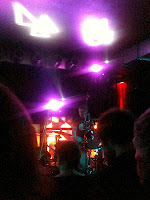 Their songs were as great as they are on the record. And possibly due to the fact that they have played a respectable number of shows during this year, they seem to have grown together even more as a live band. They played tight and perfectly in synch with each other and were good fun to watch. Musically it didn't really differ much from their last show or respectively from their records. However, they played at least two new songs which I hadn't heard before and which were a bit "quicker" than the rest, if that category even applies to them.

Other than that, they just performed their amazing mix of dry and minimalistic bass and synth lines accompanied by repetitive drums and some distant vocals. It's like a perfect blend of post punk elements with drony Krautrock and sometimes a hint of dub. In a way it's dancy and calming at the same time and seems to work either in a club atmosphere like this, as well as on a lazy evening on the sofa at home. They played for about an hour and came back for a two-song encore which was about the optimum length.
In the end, I have to say that I'm glad to have had the chance to see them live again. If anything, they reconfirmed their place on my personal top lists of the year, not only live but also on record. I'm really looking forward for some new stuff sometime in the (hopefully) near future.
Posted by J. at 12:30