This already was a while ago. I didn't have the chance to write something before but still want to mention it because it was a memorable show. 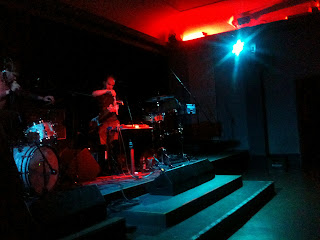 Berghain Kantine wasn't nearly as filled as I imagined when Aidan Baker, whom we already wrote about numerous times, started the evening with his newest three piece band project B/B/S. With this two guitars and a drummer line up, they played the sort of music you'd expect to hear from him. Epic postrock songs that slowly built up, got noisier and louder and then slowly faded out. He surely knows what he's doing and if you're into postrock or postmetal in any way, you'll like what he does. The live drummer added some interesting  "real band" experience to the whole thing and definitely freshened it up a little.. 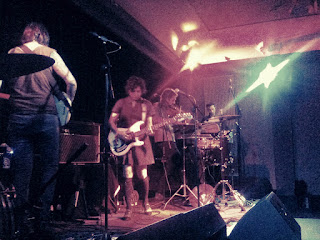 Next up were Evangelista. Now I already saw Carla Bozulich perform twice this year (plus once last year opening for Thurston Moore). One time collaborating with Okkyung Lee on cello and Morten J. Olsen on drums/percussions at Ausland and the other time together with Jhno and Aidan Baker at bei Roy. Both times were totally different experiences but also totally great in their ways, so I was sort of sure this won't disappoint me either.

Playing with her full band again sounded and felt totally different than the concerts I saw before and it was pretty awesome! Carla was singing, shouting, preaching, joking and the show was musically very intense. For a couple of songs they borrowed the drummer from B/B/S which made the whole thing even better, I wished he could have played the whole set with them. But nonetheless the four piece band played a truly great set of dark and mesmerizing music, somewhere between postrock, folk elements and experimental ambient sounds. I left happy and hope they'll be back sometime soon.