John Maus on Saturday, Hot Snakes on Sunday. Nothing could possibly top this. Think again. Monday night, J. and I went on a date at Volksbühne, where Thurston Moore would make this an unforgettable evening for us.

People have been wary of his solo endeavors. What if they would be too experimental? Or in contrast, what if he would just turn into an old ex-punk folk dude? And isn't Beck the producer on Thurston's album? What if he's turned LA funky? But his solo album is wonderful and one of the best albums of this year. Mr Moore's soothing voice, dark folk tunes, noisy endeavors and all spiced up with a good portion of Beck's production genius. However, we were unsure as to what was going to await us in terms of a live performance. 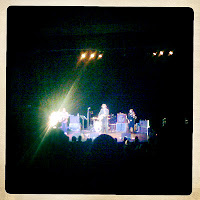 Our worries were dumbfounded. Once Carla Bozulich had given a startling performance with her two-people-project and an array of instrumentation, Thurston Moore took the stage with a full band consisting of a harp player, a violinist, a drummer and an additional guitarist. The man himself needed exactly five items to perform: two acoustic guitars, between which he would alternate throughout the set, a microphone, a music stand and a lot of water. Neatly dressed with a suit jacket and tie (but jeans and trainers), he immediately made an impression on the audience that was intently listening to every word he would say or sing. Yes, he is admired. Rightly so, I may add. 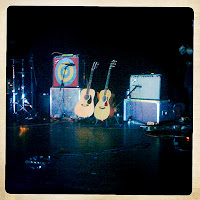 The darkened room at Volksbühne and the comfortable theatre chairs made me a little sleepy. But the moment this man entered the room and grabbed his guitar, he received my fullest attention. His music is as youthfulness as his looks (there is something odd about looking 15 years old for your entire life, and who knows how he does that). Yes, it is folky but kind of dark, and at least every second song would turn into a noise fest, which sounds great when a harp and a violin are involved. And you can hear Sonic Youth in there, intentionally or not. Inbetween songs, he would sometimes read out beat poetry. I assume he wrote those words himself or I presume he would have credited the author. This lyrical component to the evening made the performance more interesting, not that it needed it. But it made you realise that there is a true artist in front of you onstage.

Thurston Moore is so unpretentious. He doesn't need a guitar technician with him; he just stops the song and tunes the guitar. He made sure to introduce his band to the audience, twice. And then there were those encores. He played a fairly long set, then came back twice for encores. But no, this audience wasn't going to let him go. When the lights had already been switched on, when the first people were already leaving the room, the majority of the audience was still clapping and shouting so much, he actually came back for a third encore of two songs. Now that is dedication! 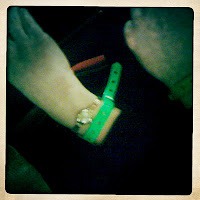 When I left Volksbühne, high from what I'd just witnessed, I was surprised by another performance that took place outside on the steps of the building. A three-piece, of which I never got to know the name, were playing with a guitar, a drum set up and some computer/keyboard equipment. It was freezing cold outside but a considerable amount of people had gathered around this group and were dancing and celebrating this rhytmic post-punk music. I stayed for two songs and loved it. All of it. The really good music, the fact that it was so unexpected, outside in the cold, the fact that people were actually stopping and dancing despite the weather, the fact that this was taking place in the centre of Berlin.

John Maus, Hot Snakes, Thurston Moore, and spontaneous music on the steps of Volksbühne: people of Berlin, we are so privileged. 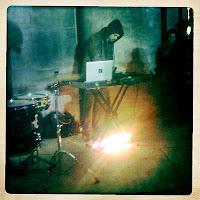 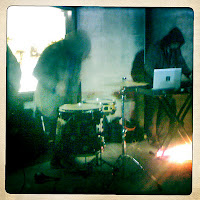