Whoa! Is it that long ago that my friend and his crew camped at my house? Time flies for sure!

Two weeks ago, Retox were in a pickle. Two of the shows on their European tour had fallen through and they were stuck in Germany for three days with one show in Berlin smack in the middle. Needless to say, when they asked me for assistance with finding accommodation, I offered my living room without hesitation. Justin Pearson, singer of the group, noteworthy member of The Locust and All Leather, and co-owner of the amazing Three One G record label, and I go back a long way. Back to 1997 to be precise, when The Locust (only called Locust then) and friends Jenny Piccolo were in a similar position, that time in the north of Sweden though. I resided in Umeå, a small northern Swedish town with a vibrant music scene, and we quickly made friends. A few visits this way and that and I can honestly say that today I call JP one of my absolutely closest friends. I've begged him many times to plan in extra time in Berlin but his tour schedules are always tight. So while the falling through of two shows was a disaster for this touring band, I was actually excited to be able to spend a few days in a row in Berlin together. Usually, our hang-out time is taking place in his hometown San Diego or at punk rock venues around Europe.

The first day the boys arrived, three went down with stomach troubles. Whether it was food poisoning (their version) or a stomach bug (my guess) is irrelevant, it boiled down to an absolutely exhausted group of Americans. Let's just say we nursed them back to life. A few good meals, some hot baths and by Friday night, the night of the show, their cheeks were getting a little rosier already. Show time! 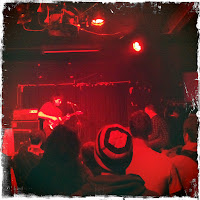 Lovelite was not as packed as I thought it would maybe be when we arrived. Sissters had already started playing but we were lucky to catch most of their set. What an amazing band! They've come a mighty long way from when I fist saw them support Screaming Females at Bang Bang Club last year. While they still play some form of post-punk, it's all gone pretty avant-garde and abstract arty. I really loved this gig and am proud to have this group in Berlin. 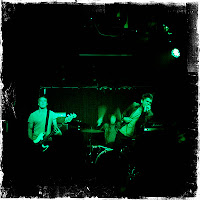 When Retox came on, I was seriously worried about what this might turn into. They have a reputation for pushing their limits as it is and with the tummy issues, I anticipated puke and collaps on stage. Luckily, no such thing happened. They did look ill but somehow, that worked well with their punk attitude. Of all the bands that Justin Pearson has played in, and Michael Crain of The Festival Of Dead Deer fame for that matter, this is the least arty and most traditionally punk project to date. And I am guessing that's where their success stems from: it's also the most accessible yet. I like quirky, weird and arty. But I'm not going to turn my nose up at some good old punk rock.

The show went down well but the crowd was a little lifeless with no dancing or any interaction really taking place. I think Retox gave a great show, especially all things considered, and I did thoroughly enjoy their energetic in-yo-face set. But the other element to a good night, the crowd, was missing a little, which was a shame.

Apart from being a friend of Justin's, I am also a great admirer of his work, even before I knew him personally. I've blogged about Swing Kids before and Struggle were part of my youth. I love how he always manages to reinvent himself, yet stays true to himself. Few people I know personally have influenced music and fashion around me in that way. But his main asset is choosing the right people to be creative with, people like Michael Crain. People who are creative and not afraid to offend, yet decent and lovable.

Of course we didn't head anywhere to party, we went home and took it easy and the next day, we took a walk around town, had some burritos, cooked some spaghetti. It was a good show but given that they were on a low, given that people in Italy had literally gone beserk at their gigs, it was the most they could muster to an audience that was reserved.

I hope to see them perform again in a more vibrant setting. I love these guys!