I was so looking forward to seeing Mi Ami, the main reason for my visit at the Levee Club, that night. Turned out it wasn't that bad that I missed their first songs... 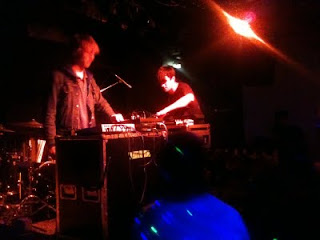 When we arrived at the club, Mi Ami were already playing. I knew from a friend, who saw them a few days ago, that they play entirely without their former bass/guitar/drum setup. So I was a bit worried beforehand. And my worries were sort of totally legit. Their latest record has very few to do with their former weird dancy post-punk records (which I really really like), but is an all-electro disco album (which I don't like at all). So maybe it wasn't all that surprising that I disliked their electro disco live set, but anyhow I was pretty disappointed. Musically it was uninspired dancy electro music paired with the typical high and hysterical Mi Ami vocals. Levee Club was hardly filled while they played and the handful of people dancing in the front also didn't make up for the somehow lousy atmosphere. The sound was shitty too, so this was like a total bummer for me. 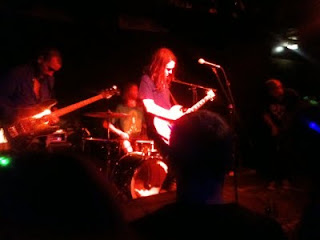 We waited outside until Liturgy played next. The club quickly filled and it was obvious that there were a lot more people there to see Liturgy than Mi Ami. Liturgy started to play and right from the start they were really great. They play "transcendental black metal" and somehow this description fits well. Their music has something almost meditative. They have a harsh and aggressive sound but their repetitive complex rhythms (their drummer is incredible!) and often almost catchy melodies go really well together and create an intense atmosphere. I sort of preferred the instrumental songs but the ones with high croaked "black metal vocals" were also really good.
When you normally think of black metal, burning churches, corpse paint, NSBM and Burzum come to mind. Liturgy, being featured in all sorts of Vice/Spex/Pitchfork magazines, managed to make "black metal" more accessible to a broader audience and apparently got rid of most black metal stereotypes. They didn't look like a typical black metal band and they didn't sound like one either. Maybe that's why there were so few apparent metal fans in the audience and probably that's the reason why there luckily weren't any corpse paint Burzum people. But at the same time that's what made them so likeable.
Posted by J. at 04:01